Last week I traveled out to Utica, NY to visit the Matt Brewing Company, home to Saranac beer. As the second oldest family-owned brewery in the country, and the oldest in New York State, the Matt Brewery is rich with history. As soon as you enter the tour center at 830 Varick Street, you’ll feel as if you’ve stepped into a museum. Originally the bottling works of the brewery, the tour center was designed and decorated back in the 60’s, by Walter Pfeiffer – a leading Victorian architect at the time. The room, featuring high-ceilings and Italian tile floors, is filled with Victorian-era antiques… Certainly not the type of decor that I’m used to seeing at a brewery!

The tour begins with a history lesson as our guide points out a display case full of old bottles and cans representing the numerous products and brands produced at the brewery over the years. From the first 1888 Lager made by The West End Brewing Company, founded by F.X. Matt the same year, to the current line-up including Saranac Beer & Soft Drinks, Utica Club, and a number of other specialty products for smaller breweries. Recently ranked the 12th largest* brewery in the United States, and 6th* out of the top 50 US Craft Breweries, the Matt Brewing Company has a lot to be proud of. 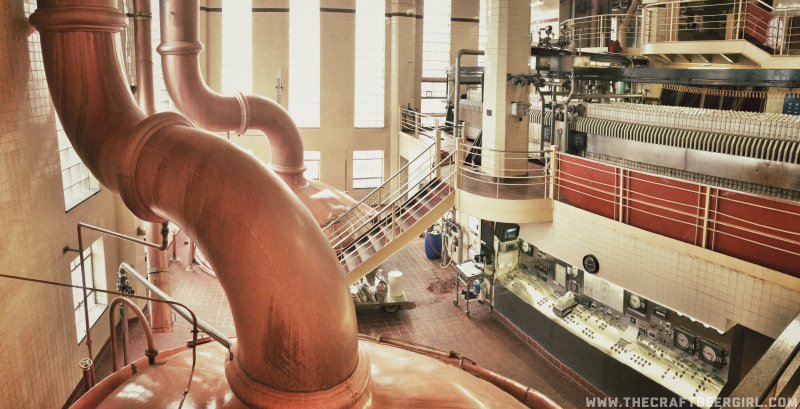 As we enter the brew house, we are greeted by two enormous copper brew kettles stretching up from the floor below. Each holding more than 500 barrels of bubbling wort, they are nothing short of beautiful. I am intrigued by the huge mash filter. Having been on a number of brewery tours and never seen one, it was interesting to learn about this piece of brewing equipment. As we toured the brewery, through twisting stairwells and winding hallways, I was amazed at how much of the old brewing technology remains in use. Mid-century control panels filled with dials and switches, needles drawing graphs on paper discs to track temperature control… Amid the same modern machinery and hi-tech gadgets seen in many breweries today, these vintage elements of the past highlight just how long the Matt Brewing Company has been around.

One thing that I was somewhat surprised to see for a facility of this size and age, was just how many steps the brewery is taking to reduce the amount of natural resources used to make beer. In addition to recycling their grains, as many breweries do, by selling it to local farmers as cattle feed, the Matt Brewing Company has been recycling CO2 for years. They actually recover the carbon dioxide produced during fermentation and reuse it to carbonate their line of Saranac soft drinks! Though, perhaps the most impressive eco-friendly improvement is the newly installed anaerobic digester system that collects all of the breweries waste and turns it into methane gas, which is then used as a source of power for the plant. This alone allows them to reduce their use of electricity by 30-40%. 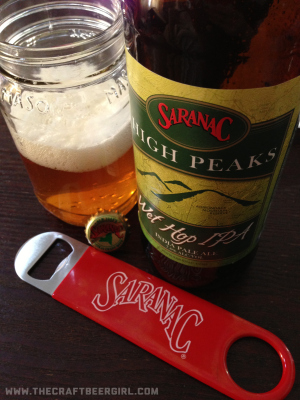 Once we’ve seen it all, the brew house, the aging cellars, the bottling and canning lines, we head up to the 1888 Tavern where we have the opportunity to sample the line-up of Saranac beers and soft drinks. The crisp mouthfeel and citrus hop kick of the White IPA is a refreshing and welcome treat as I reflect on all I’ve learned throughout the extensive tour. We even had the good fortune of meeting Matt Brewing CEO, Nick Matt, who stopped by and enjoyed a few samples with us.

If you have the chance, I highly recommend touring the Saranac Brewery. Check their website for seasonal hours and tour details.